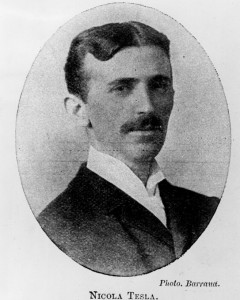 The Radio
Tesla’s invention of the radio was debated in in early 20th century. Guglielmo Marconi claimed to have invented the radio, but he actually used technology that Tesla patented to make his first radio transmission in 1901. After much debate, the U.S. Supreme court eventually ruled in Tesla’s favor, recognizing him as the radio’s inventor in 1943. Unfortunately, this occurred months after Tesla’s death.

Electric Motors
Ever wonder where the electric car company Tesla got it’s name? Nikola Tesla invented the alternating current (AC) motor in 1888. The Tesla Roadster’s motor is a direct descendant of Nikola Tesla’s original invention. Tesla was inducted into the National Inventors Hall of Fame for that invention in 1975.

Neon Lighting
Tesla created some of the first neon and fluorescent lighting. The neon lights that he exhibited in 1893 are similar to the ones we see today.

Florescent Light Bulbs
Tesla developed and used florescent bulbs in his lab some 40 years before industry “invented” them. At the World’s Fair, Tesla took glass tubes and bent them into famous scientists’ names, in effect creating the first neon signs.

To read a great book on Telsa, read Tesla: Man Out of Time